ALL VESSELS DEPARTING FROM THE USA MUST COMPLY WITH USCG, OFAC, AND BIS REGULATIONS AND OBTAIN THE RELEVANT PERMITS FOR TRANSIT AND INSURANCE IS RECOMMENDED

Boaters arrive on the shores of Cuba from many different regions. The most common sailing routes are those between Cuba and: Florida, Mexico, the Cayman Islands, the Bahamas and the islands of the Eastern Caribbean. It is important to understand that Cuba has only nine ports of entry and your landfall must be at one of these designated ports. Arriving in Cuba in any other location—regardless of your circumstances—will result in being turned away and with the likely-hood that you will not be granted entry when you do finally reach a designated port of entry (PoE). This may sound harsh but Cuba has a set of rules and procedures for foreign boats entering the country and these rules are strictly adhered to.

The first thing you must do when approaching a port of entry (at 12 nm) is to make contact via VHF—you may need to be much closer to shore as officials are often using handheld radios. In most ports the harbourmaster will respond in English but often with an accent.. Once you have made contact, the harbourmaster will give you all the pertinent information for entering their port—buoyage, depth, courses, where to tie etc. After your vessel is secured the officials will come aboard. Everyone on your vessel must have a valid passport.

All Cubans, including the officials, are pleased that you have come to Cuba and will be very friendly and happy to welcome you to their island. The number of officials and inspectors that will come aboard will vary from port to port. You should expect anywhere from two people to a dozen or more including drug sniffing dogs in the larger ports. It is recommended that a member of the crew accompany those who search your boat. Some officials may ask for a tip, you are not in away way obliged to tip them and in many ports a handout is in fact frowned upon by the ranking official. At your port of entry you will be issued clearance for your vessel and a visa for each crew member.

Contact us for assistance with all paperwork and visas in advance of your departure for a smoother entry. 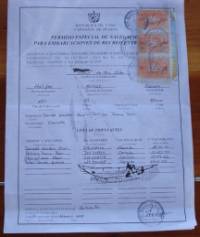 If you plan on cruising the coast then you must have a cruising permit. This is issued by the Guarda Frontera upon departure from the PoE. Make sure the marina harbourmaster is aware of this so that he can inform the Guarda Frontera, this should ensure that the Guarda have the permit and stamps for you when you check out. NOTE: In 2008 and 2009 this permit was “to cruise the waters of Cuba”, it did not permit you to go ashore except at a designated marina.

We hope this will change in the near future. 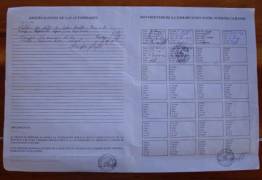 Three seals of approval on the outside cover of the permit. Inside there is a series of small boxes. A Guarda Frontera officer enters the date/time of arrival and departure in each box. This procedure should be short as NO search is required by the officer. If they insist then a crewmember should accompany the person doing the search. 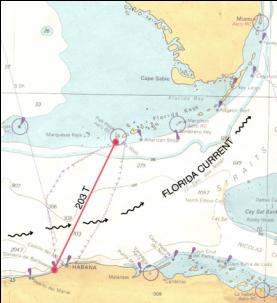 The current that runs northward along Florida’s east coast is officially named the Florida Current and not the Gulf Stream, the name most boaters tend to use. Call it what you will, whether Bahama bound or headed for Mexico or Cuba either way this virtual river must be crossed.

The rule of thumb—do not to cross the Gulf Stream during a cold front—in other words when the wind is northerly. North winds create a terrible wind-over-tide effect in the Gulf Stream resulting in a motion that could be described as “putting your boat through a washing machine”.  After a cold front has past the seas settle quickly and prevailing easterlies return. The best weather window for crossing the Gulf Stream to Cuba is to have easterly winds of 15 to 18 knots or less.

Your best strategy is to make the crossing during the night, when the winds tend to be light, and reach the coast of Cuba in the morning. The axis of the Gulf Stream will be encountered at approximately 50 nautical miles south of the Florida Keys here the current reaches upwards of 2.5 knots. The roughest part of this crossing will be approximately 10 miles before reaching the axis and 10 miles after you have crossed it especially if the wind is gusting. Don’t be concerned about compensating for the current. You can easily make back your westing in the morning close in along the Cuban coast. You may in fact find the counter-current helping you to make back the westing.