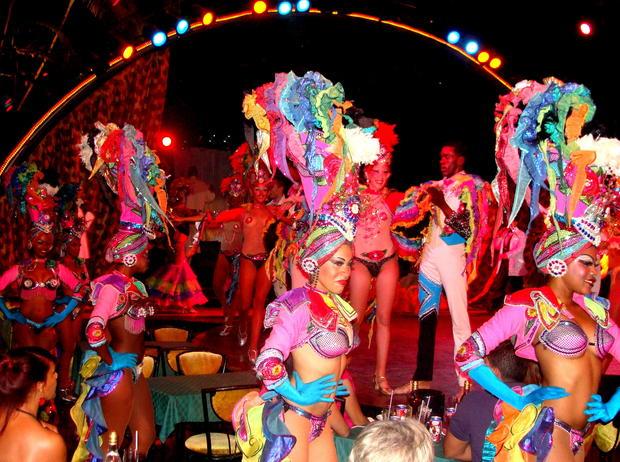 Havana is renowned for its after-dark entertainment scene, and only the tip of the iceberg is visible to tourists on a short stay. Even medium-sized bars usually have a house band playing Cuban classics. The Casa de la Musica in Havana attracts tourists and locals alike, the latter distinguished by their accomplished salsa dance moves and ability to consume whole bottles of Varadero rum. The famous Tropicana nightclub stages nightly open-air cabarets that are a throwback to the decadent days before the Revolution. The Cabaret Parisien at the Hotel Nacional is similar, and both attract tour groups on ‘day and night’ packages from the coastal beach resorts.

Theater, opera and ballet are staged all year round in Havana and seats are very cheap. Cinemas show films in Spanish, but some have subtitles. Santiago de Cuba is the spiritual home of Son – the music that gave birth to salsa, and regular live sessions are on offer at the Casa de la Trova. In beach resorts, nightlife tends to mimic what is on offer in Havana, with varying degrees of success. Varadero has a thriving scene, but in the smaller resorts (many of which are all-inclusive) most entertainment is planned and formulaic.

From salsa to son, timba to rumba, follows the irresistible sound of Cuba’s hottest music.

There is music everywhere in Cuba, people say, and everybody dances in the street. Well, yes and no. There is music everywhere: the jangle of traditional son bursting from cafes on a hot afternoon; the thunk-thunk-thunk of reggaeton blaring out of cars; the bop-bop-bop of congas being played in a living room; saccharine Latin pop blasting from a balcony as a woman does her laundry. There is so much music, in fact, that sometimes one wishes for just a moment’s silence.

A trip to Havana allows you to immerse yourself in a rich variety of sounds and performing arts and, should the mood take you, to dance, too. The mood has taken me many times and I have been drawn to Havana again and again. It’s a long way to go for a dance but the omnipresent tropical rhythms, along with the city’s timeless ambience and warm but complicated people, have an irresistible allure.

Since its settlement by the Spanish in 1512, Cuba has become one of the most musically prolific nations in the world. The ensuing centuries saw African rhythms combine with European musical traditions (primarily Spanish and French) to create more than a dozen new forms.

In the ’90s it was the turn of son, a provincial music developed in the late 19th century that hit its stride in Cuba the 1920s. It became a worldwide phenomenon when American musician Ry Cooder went to Havana and recorded an album with forgotten stars of the genre. Buena Vista Social Club sold more than 6 million copies and won a Grammy. The film by Wim Wenders, documenting the album’s creation, was nominated for an Oscar.

It had been many decades since son was widely heard in Cuba but the government, no slouch when it comes to tourism, realised quickly that the sudden boom in holidaymakers was a direct result of the success of Cooder’s album.

You don’t have to go far to find son in Havana any more; it spills out of cafes and bars in the city’s two main tourist areas. Songs from the album are played with verve and feeling by small conjuntos (salsa bands), who follow Compay Segundo’s Chan Chan with My Way or Yesterday. The music may be authentic but the experience is not: you’ll find few Cubans here and it’s possible you won’t be allowed to dance. “No se permite bailar”, dancing is not permitted, reads a sign outside one such restaurant.

To hear son in a more lively environment, head for Salon Rosado Benny More, known as La Tropical, in suburban Havana. The open-air venue has been a favorite playground for Habaneros since it was opened by an adjacent brewery in 1904. All the top bands have played there during the past century and it continues to hold an important place in Cuban culture.

On Sunday afternoons a band plays traditional music, usually son, to an audience keen to keep alive the accompanying form of dance, which is more refined than the raunchier “casino” style of dancing that accompanies timba, Cuba’s fiery, funky form of salsa that is son’s hyperactive grandchild.

You can find timba at La Tropical at night

Timba groups dominate the other live venues but they also host R&B, son, hip-hop and reggaeton (a Puerto Rican hybrid of hip-hop and dancehall). These clubs have two sessions a day: in the afternoon (5-9pm) and at night (11pm-3am). The matinees are a bargain, never more than $CUC10 ($13) admittance, and they’re an unforgettable experience.

Manolito y su Trabuco, one of the country’s top five salsa groups, play every Thursday afternoon at Cafe Cantante, when they are not on one of their frequent tours to Europe, Canada or South America. There is an open invitation at this gig, which is regularly crammed with locals and tourists, for musicians from other groups, and other genres, to drop in and play.

Every year, the Cubadisco week ends with a free outdoor concert, held this year at the Anti-Imperialist Plaza (the space also holds political events). The program had announced that the five nominees in the awards’ most prestigious category, musica bailable (salsa-timba), would play for free.

As with many events in Havana, this didn’t come off quite as promised, though the evening wound up offering a more diverse taste of Cuba’s musical delights: Rumbata, an Afro-Cuban folkloric group of drummers and singers, was followed by Orquesta Maravilla de Florida, a charanga group (containing flute and strings instead of brass) formed in 1948 but now comprising young musicians who put a modern twist on the classic sound. Manolito y su Trabuco, the winner in the category, closed the show.

Neither blazing incandescent lighting (designed to discourage fights) nor intermittent showers could dampen the spirits of the crowd.

You don’t always get what you expect in Havana but you almost always get something great. Last year, a week celebrating poetry ended in a remarkable performance in Habana Vieja (Old Havana). At the sea end of Prado, a stately old avenue with a wide marble promenade in its centre, folkloric dancers and their band put on an electrifying performance as the sun set for the assembled, a mixture of locals and foreigners, and those watching from the balconies of nearby apartments.

The athletic dancers, dressed in a series of colourful costumes, performed dances of the orishas (gods), as well as a stunning choreography of maypole dancing at breakneck speed, never once getting tangled up in the poles’ colourful ribbons. As darkness fell, the show drew to a close with a spectacular fire dance.

Afterwards, as the roadies packed up the gear, recorded salsa was played and those who weren’t quite ready to go home paired off and started dancing – yep, we were dancing in the street. 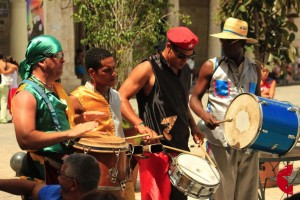 A general rule for going out in Havana is: be relaxed. It can be difficult to find out what’s on and things often change at the last minute. Be flexible and you will see some great performances, even if they are not the ones you had anticipated. Outdoor shows are often cancelled if it rains or if it looks like raining but sometimes they go ahead regardless. If it’s possible, call the venue to check what’s on (you will need to understand Spanish and be persistent: phones aren’t always answered). Otherwise, go anyway.

In tourist bars and cafes in Habana Vieja and Vedado; follow the sounds.

These are held all over Havana. Check TV, papers, radio and the grapevine for details.